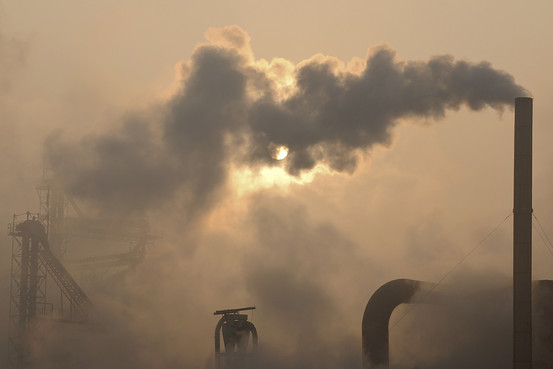 Smoke is emitted from chimneys of a cement plant in China’s Shandong province.
Associated Press

Yesterday, the International Monetary Fund’s number-two official made news by urging China to lower its annual growth target next year to 7% GDP growth, down from 7.5%. That may not sound like much. But in a country obsessed with targets, the growth projection is the single most important target, because it signals whether Beijing will go hell-bent for growth or ease off and accept some slowing as the cost of reform.

Today it was the World Bank’s turn, at a briefing called to discuss its views on China’s economy. Was IMF deputy director David Lipton right, reporters asked?

Seven percent “sounds like a reasonable growth number,” World Bank senior economist Karlis Smits replied. He noted that the country’s five-year plan, which runs from 2011 through 2015, aims for an average of 7% annual growth—but that is connected to per-capita income, which China hopes to double by 2020.

Should the World Bank urge China to lower its growth target next year? he was asked again.

Mr. Smits couldn’t quite bring himself to directly say yes.

Instead, he noted the importance of the annual GDP goal, which is set early every year. He said it signals local governments whether they should amp up or cool down economic activity. “So there’s a danger if the target is set too high that the [localities’] direct participation in delivering growth” may increase China’s longer-term problems, including relying too much on debt, he said.

And there are yet other targets that matter, the World Bank economist added, including targets for delivering public service and tax collection. Localities would be better off focusing on those targets than the national GDP target. “Then the growth target might not be contributing to [China’s] vulnerabilities,” he said.