Add the World Bank’s top economist to the ranks of those worried about China’s debt bubble bursting. 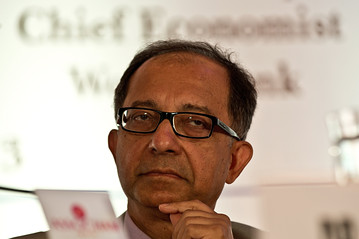 China’s been fueling stellar growth in large part through credit. That works in the short term, said Kaushik Basu, the bank’s chief economist at a WSJ CFO conference in Washington Tuesday.

But it only delays needed financial reconciliation, he said.

“When that adjustment comes, there is a bit of a risk that China will find it very difficult to manage, simply because there is no hard science of financial management,” Mr. Basu said.

“We’ve seen that in the U.S. in 2008, and China may have to face up to that sometime in the coming year, or couple of years because of its bloated finances,” he said.

In April, the International Monetary Fund urged China to rein in its credit growth, even if it meant slow growth. Without stronger oversight of China’s lending practices, the IMF warned, the country risks a financial crisis that could send the economy into a nosedive.

As the world’s second-largest economy  and one of the primary drivers of economic growth around the world, China’s fate is a worry around the globe. A precipitous slowdown would send economic shockwaves throughout the global economy.