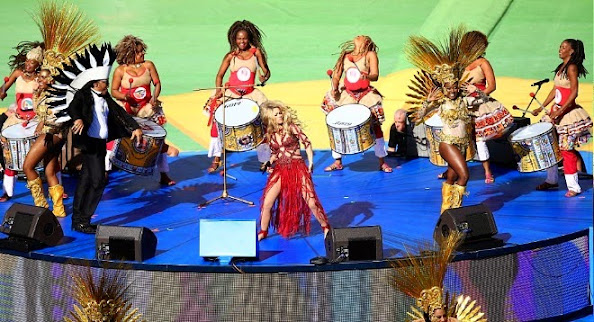 Nobody will deny that Brazil messed up the opening ceremony it was so boring and lame that people were question the point of having these ceremonies before the big event. On top of that Pitbull and Jennifer Lopez did not live up to the expectations in their part of performance which lead FIFA & Brazil FA to make things up in the closing ceremony as they are inviting the real queen of World Cup ceremonies “Shakira” to perform at 2014 world cup.

FIFA has confirmed that Shakira will perform in the closing Cermeony and with that she will complete her hattrick of world cup ceremony performances. She performed in 2006 world Cup, while she was all over 2010 world cup in south africa and now she will finish of the 2014 world cup with her performance on her worl cup song La La La (Brazil 2014) at the Maracana stadium.

Like we mentioned before Shakira is confirmed to be part of 2014 world closing ceremony, but other stars will be there ?

Carlos Santana, Wyclef Jean and Alexandre Pires will be singing live their official world cup anthem called “Dar Um Jeito” while local star Ivete Sangalo will be singing couple of portugese (brazilian songs) and there is also a Samba performance which will be performed by students from different schools in Brazil.