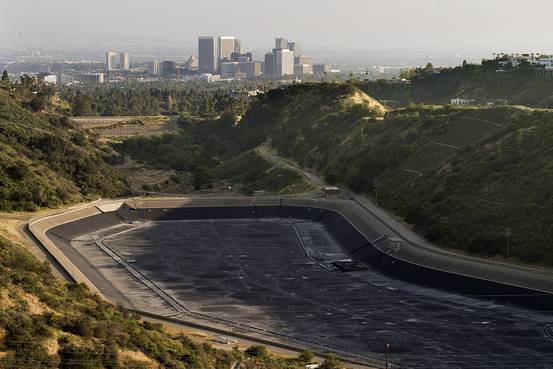 An empty water reservoir above Los Angeles this week as a severe drought continues to affect the state of California, which recently announced sweeping statewide water restrictions.
MARK RALSTON/AFP/GETTY IMAGES

The new water restrictions put in place in California will have only a small impact on that state’s economy, said economists surveyed in April by The Wall Street Journal.

On April 1, California Gov. Jerry Brown mandated water restrictions in response to the ongoing drought in the state.  The target is a 25% savings in potable urban water consumption over the next nine months.  Agriculture was exempt from the restrictions. 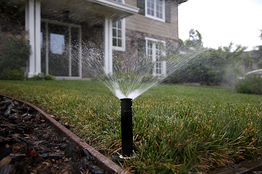 A sprinkler waters a lawn this week in Walnut Creek, Calif., where residents are facing a mandatory 25% reduction in water use.
JUSTIN SULLIVAN/GETTY IMAGES

Bloomberg News recently estimated that if the Golden State were its own country, its economy would be the seventh largest in the world. The question is whether mandatory cuts in water use will curb some of the state’s economic activity.

A slim majority, 51%, of the forecasters who answered the special questions on California said the drag from the restrictions will be too small to show up in economic data such as income growth, employment and retail activity. Another 44% thought the drag would be small but measurable in the data.

Sean Snaith of University of Central Florida echoed a sentiment voiced by a few economists that there would be “a much greater impact if the restrictions are extended to agriculture.”  If so, the California economy would show a greater slowdown and consumers across the U.S. could see higher food prices.

“The larger issue is what restrictions today do to growth going forward,” said Diane Swonk of Mesirow Financial, “It is yet another cost of being in California.”

5 Things to Know About California’s Drought