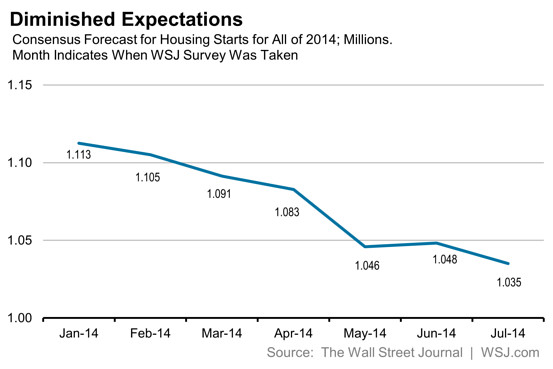 Economists entered 2014 thinking the housing sector would be a big driver for economic growth. Those hopes have been greatly diminished. According to The Wall Street Journal’s July survey of forecasters, housing starts will total 1.035 million this year. While that still represents a gain from 2013’s pace of 924,900, it is well below the 1.11 million starts projected in the January survey.

Housing has been a disappointment in the first half. On Thursday, the Commerce Department said June starts unexpectedly dropped 9.3% to a nine-month low of 893,000, at an annual rate.

Indeed, if there’s a silver lining in the forecasters’ housing outlook, it is that homebuilding will pick up solidly in the second half of the year. Starts in the first six months averaged about 953,000. That means starts will have to average about 1.12 million in order to hit the survey’s housing number.