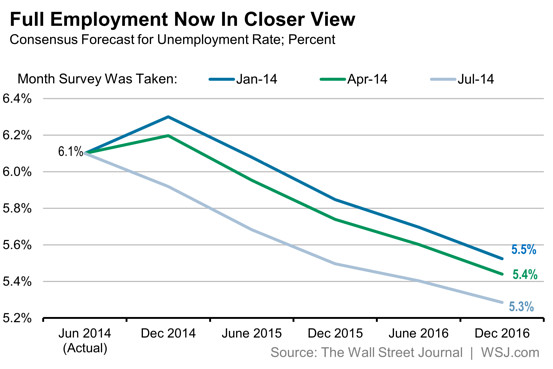 At the start of 2014, economists surveyed by the Wall Street Journal didn’t think the unemployment rate would have a 5-handle until sometime in the second half of 2015. In July, however, the consensus view calls for the rate to end 2014 at 5.9%.

Certainly, the job-market progress in the first half of 2014 is driving the more upbeat outlook. The latest available jobless rate (for December) was 6.7% at the time the January 2014 survey was taken. By June, the rate had dropped to 6.1%. But economists also think the burst in job growth seen in the first half will continue through the rest of 2014.

How does the view from private economists compare with those at the Fed? The private forecasters see the slack in the labor markets diminishing much more quickly that policymakers do. (One difference: The WSJ survey asks for a December rate while the Fed asks for the fourth quarter average.) According to the Fed’s June economic projections, Fed officials expect the unemployment rate to end 2014 between 6.0% and 6.1% and 5.4% to 5.7% in 2015.