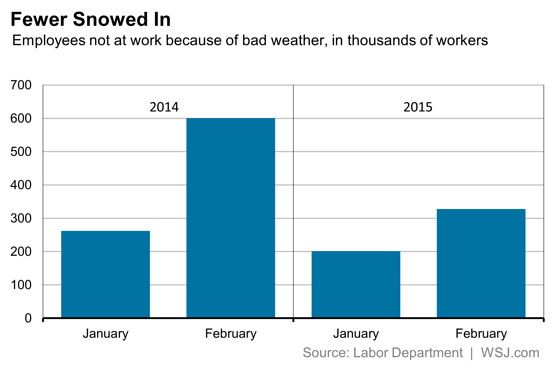 With apologies to New England, this winter hasn’t been severe enough to cause a big disruption in the U.S. economy. That’s the view of economists surveyed in March by The Wall Street Journal.

The impact was small and temporary, according to the panel of 63 economists (not all of whom answered every question). On average, the forecasters think weather subtracted 0.34 percentage point from inflation-adjusted gross domestic product growth in the first quarter.  That means they think real GDP is growing at a 2.3% annual rate this quarter, instead of about 2.6% if snow and ice had not disrupted transportation systems and closed down schools and businesses and canceled flights. 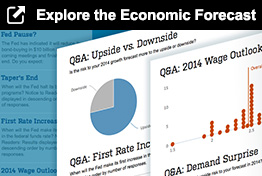 The slap to the economy, however, is nowhere near the beat-down the economy took in the “polar vortex” winter of 2014. At various times during the first three months of 2014, consumers could not get out to shop, factories had to close down production, and home builders could not work outside. Real GDP actually contracted at a 2.1% pace in the first quarter of 2014.

This winter saw “some cold and snow in the northern U.S. but not as if a glacier covered the area,” said University of Central Florida economist Sean Snaith.

Moreover, say the forecasters, much—but not all–of the activity will be made up in the spring.

“Consumers who didn’t buy a car in the winter can purchase one in the spring,” said Fannie Mae economist Douglas Duncan.  But he added that discretionary purchases, like restaurant meals, are unlikely to be made up.

The catchup is why the average forecast expects economic growth will pick up to 3% when temperatures rise in the second quarter.