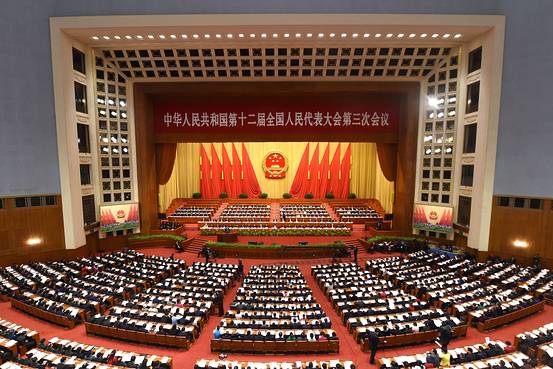 The National People’s Congress, China’s Communist Party-controlled legislature, gathers at the Great Hall of the People in Beijing this year. “Until China fully transforms its nation into an open democracy with an economy much more transparent, subject to market forces…there is no chance the renminbi will overtake the U.S. dollar,” said Economic Outlook Group’s Bernard Baumohl.
WANG ZHAO/AFP/GETTY IMAGES

China’s yuan is highly unlikely to challenge the dollar’s hegemony as the world’s most used reserve currency in the next 50 years despite winning International Monetary Fund backing, according to economists surveyed by The Wall Street Journal.

The IMF last week added the yuan to its elite basket of reserve currencies, acknowledging the growing heft of the world’s No. 2 economy and encouraging Beijing to move ahead with promised liberalization.

But economists surveyed by the Journal expressed deep uncertainty about the country’s political and economic fate. Beijing’s ponderous move toward freer markets and a more open society will likely keep a tight lid on the yuan’s appeal as a reserve currency in the decades ahead, many said. 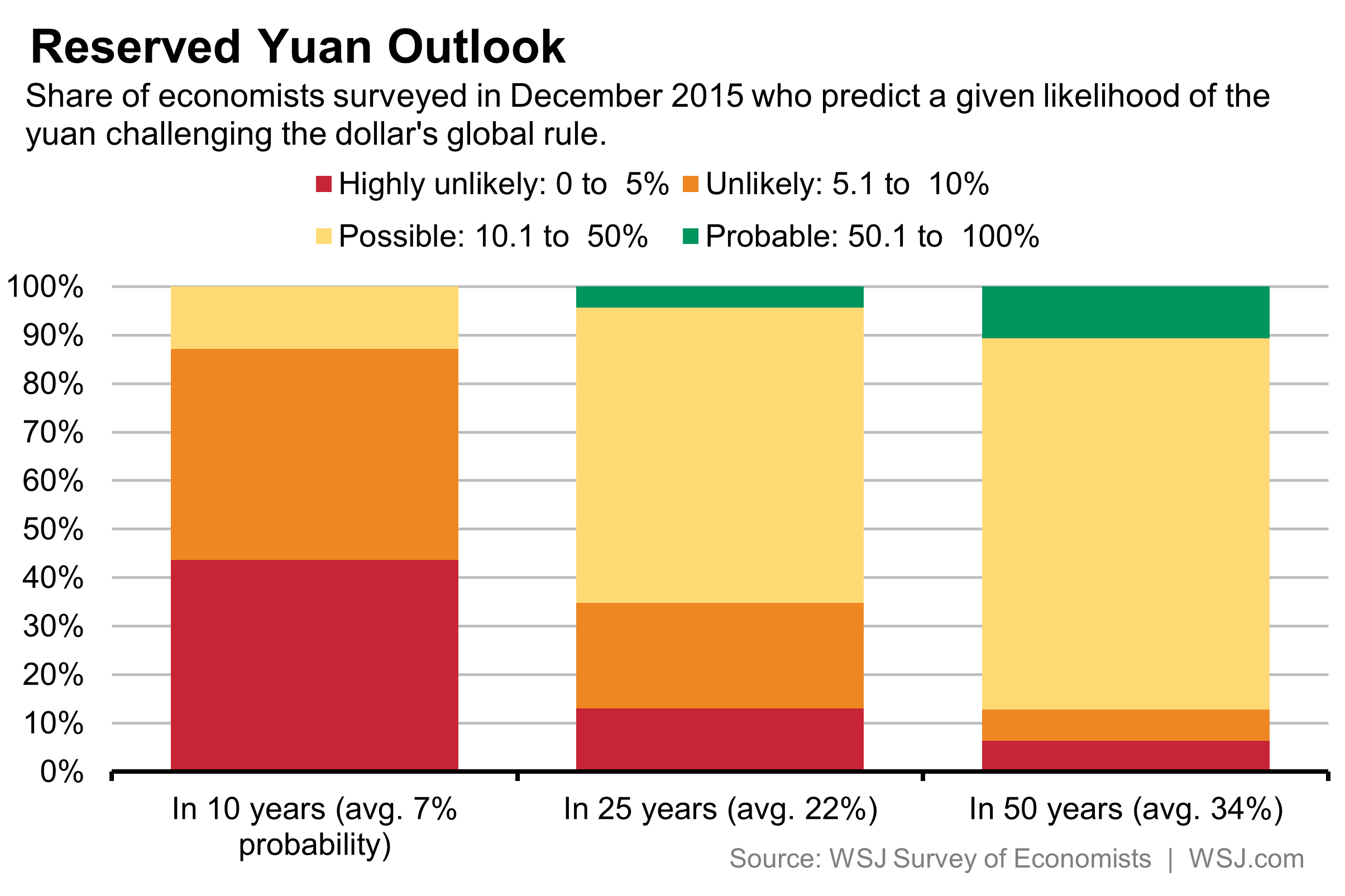 “Until China fully transforms its nation into an open democracy with an economy much more transparent, subject to market forces…there is no chance the renminbi will overtake the U.S. dollar,” said Economic Outlook Group’s Bernard Baumohl. To match the dollar’s appeal, China will need markets as deep as those in the U.S. and to produce economic indicators that are trustworthy, he said.

Mark Nielson of MacroEcon gave China a 40% chance of the yuan challenging the dollar’s rule in the next fifty years: “Long-term China stability is uncertain.”

And Sam Kahan and Jim Meil of ACT Research said, “Unless there is a dramatic change in the economic and political structure of China, the yuan won’t be a challenger.”

Economists on average gave the yuan a 7% chance of testing the greenback’s global supremacy in the coming decade, one-in-five odds over the next 25 years and only 34% chance within 50 years. The Journal surveyed 65 economists Friday through Tuesday, though not every forecaster answered every question.

“The odds go up if freedom and capitalism are allowed,” said David Berson at Nationwide Insurance.

In reaching the decision to add the yuan to its basket of reserve currencies, the IMF pointed to China’s trade and efforts to start opening its financial system to international investors.

But Ram Bhagavatula of Combinatorics Capital said “faith in a legal framework is more important than trade volumes.”

In the near term, economists were divided on whether China would depreciate the yuan significantly in the next year in the face of a cooling economy. 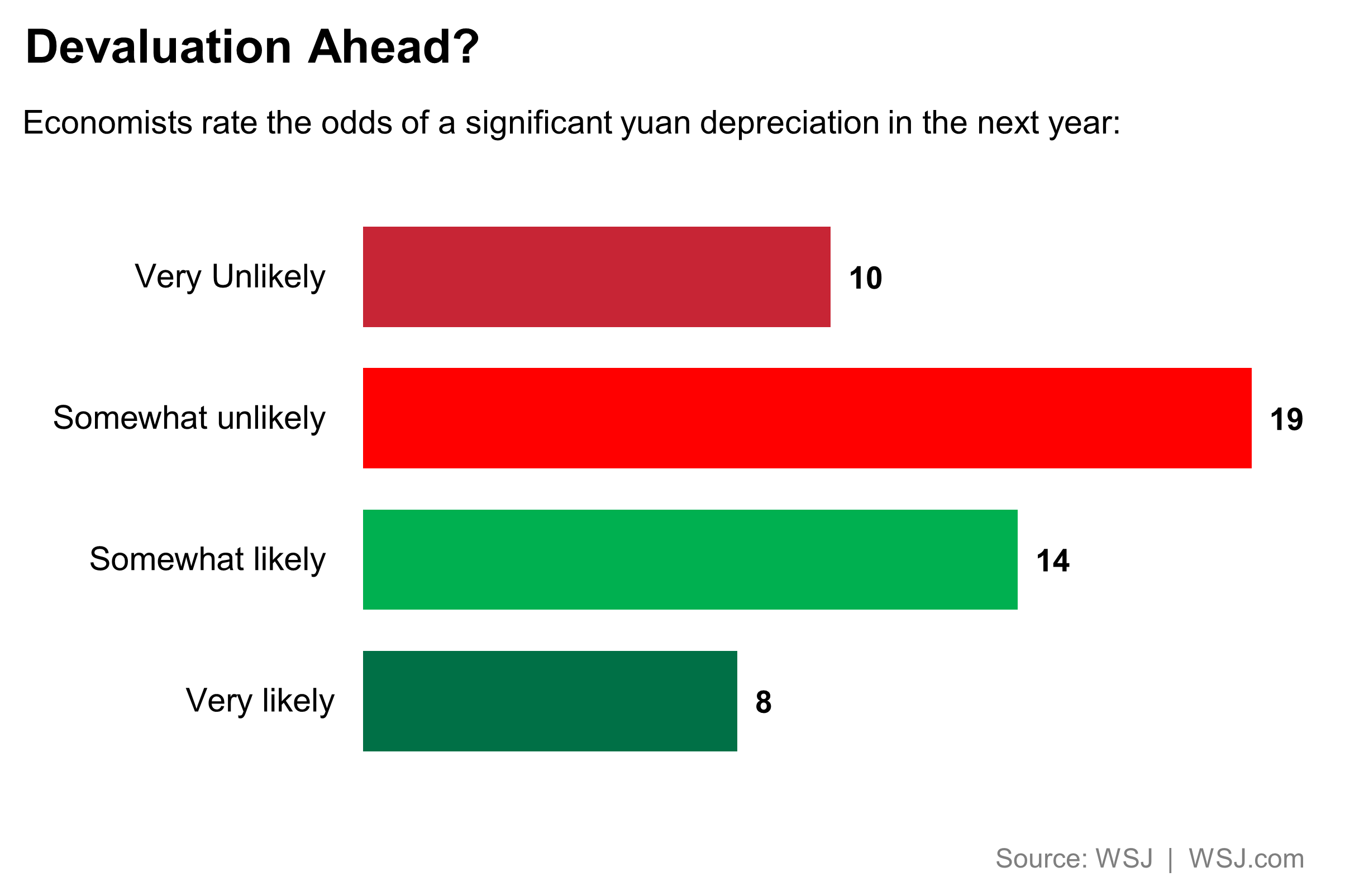 Beijing sparked global market panic in August when it allowed a 2% depreciation in the yuan, fueling worries authorities were reverting to their old policy playbook in a desperate effort to revive a flagging economy.  Although Beijing said the move was the consequence of allowing the market to play more of a role in defining the yuan’s value, markets initially feared it was the start of a long-term depreciation trend.

China-watchers now say the move was primarily intended to gain entry into the IMF’s lending basket.

In fact, Beijing has been selling its foreign currency reserves to help prevent further devaluation of the yuan.

There’s still worry the yuan’s value could still plummet, however, especially as the currency continues a downward trend. Exporters in China still hold considerable sway in the country’s political ranks and calls for a weaker currency are likely to swell if the economic deceleration quickens.

The IMF’s top Asia economist, Changyong Rhee, said in a separate interview that China pessimism is overblown. But he doesn’t rule out a yuan depreciation.

“If growth momentum continues to decline, and there’s bad news, then I think they have to rely on a more flexible exchange rate system.”