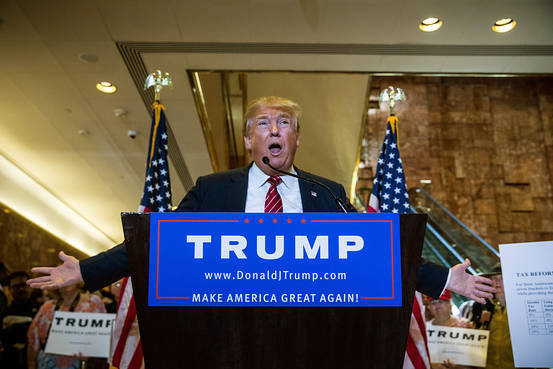 When Republican presidential hopeful Donald Trump gives a speech outlining his vision for tax reform, he can do it from a Trump-branded skyscraper on Fifth Avenue in New York City.
ANDREW BURTON/GETTY IMAGES

While Donald Trump is running for a new job, more job hunters are seeking out his companies.

In the days surrounding Mr. Trump declaring his candidacy in June, Indeed searches for “Trump” increased by about 70% from the average recorded during the first five months of the years. And as the “Make America Great Again” campaign found traction, the attraction to jobs seekers grew further.

By late August, after Trump made headlines following the first Republican debate, 12 of every million searches on Indeed were for “Trump.” That’s up from an average of 5.2 per million between January and May. 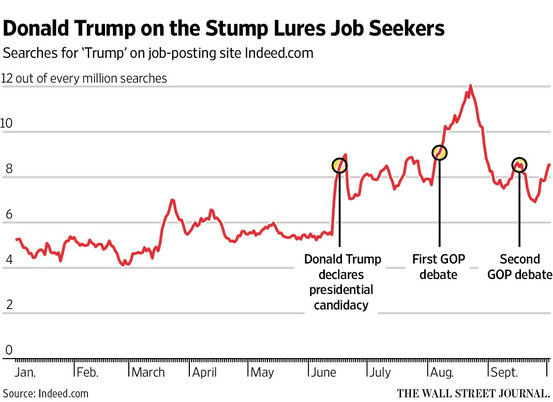 Interest in the Trump name from job seekers has cooled somewhat in recent weeks, similar to his showing in national polls, but remains well above where they were before he announced his candidacy.

Job searches often mimic “what is happening in the national conversation, or simply reflect a rising interest,” Indeed chief economist Tara Sinclair said. “In the case of Trump, you have a presidential candidate who not only has his own businesses, but has a name that is tied to business for many Americans.”

No other candidate in the current election cycle has yielded nearly as much interest from prospective employees.

Searches for “Clinton Foundation” did increase, relative to prior levels, after Hillary Clinton made her long-expected announcement that she was running for president in April. Searches peaked at nearly one per million in late April, but have settled since to preannouncement levels.

Mrs. Clinton took an active role in the foundation started by her husband, former President Bill Clinton, after stepping down as secretary of state in 2013. She resigned from the foundation’s board this year when she began her campaign.

There’s been no meaningful change interest in Hewlett-Packard Co., the technology company once led by Republican candidate Carly Fiorina. No other candidates have close ties to specific private employers.

Unlike the Clinton Foundation or Hewlett-Packard, Trump-branded organizations offer a range of jobs that have lower education and experience requirements.

A search on Indeed for “Trump” this week yielded results such as a call for hostesses and bartenders at Trump Restaurants LLC in New York, a crowd-control specialist for Trump Entertainment Resorts in Atlantic City, N.J., and an overnight manager at Trump International Beach Resort in Miami.

Searches for “Costco” increase by 50% after the speech, and held that elevated level for two weeks. The bounce was stronger than other companies mentioned by president at some point during the speech, including Apple Inc. and Verizon Communications Inc.

Donald Trump Is Right: About 42% of Americans Are Unemployed (If You Include My 88-Year-Old Grandma)