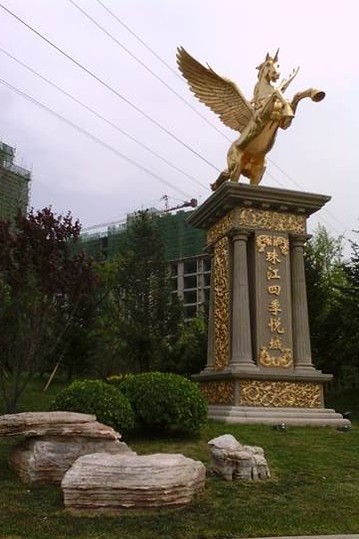 Even unicorns might not be able to give China’s property market a boost.
Liyan Qi/The Wall Street Journal

On an empty street in a remote suburb of Beijing, a huge golden unicorn stands guard over Season Joy City, a half-finished development of a dozen tower blocks set in 50,000 square meters of manicured parkland.

About a third of the apartments are sold, but with increasing signs that China’s property market is turning sour, the developer behind the project is trying to hurry things along.

But the biggest draw is a “zero down payment” scheme, available for a two-and-a-half-week period only. At first sight this seems to go against government regulations, brought in to keep house prices under control, which stipulate a minimum 30% down payment on ordinary residential purchases.

Zero down payment schemes have popped up around China as developers go to ever greater lengths to shift apartments, but Season Joy City may have the distinction of being the first to try it in Beijing, said Tang Li, an analyst at North Square Blue Oak, an investment bank.

“They will help homebuyers to apply for this consumer loan that they can use as a down payment,” said Mr. Tang. “It’s very difficult to judge whether this is in line with the regulations or not. So far there’s been no punishment from the government.”

All this is to avoid cutting prices, which developers could fear could tank public faith in the housing market and ultimately pummel sales further. Instead, they resort to ingenious “promotions,” throwing in freebies worth thousands of dollars and even whole free rooms rather than slashing prices outright.

At Season Joy City, the price remains unchanged at 14,800 yuan per square meter (the second floor isn’t included in the calculation.) That means a 90 square meter apartment would clock in at 1.3 million yuan ($208,000).

The developer behind the project, Beijing Pearl River Real Estate Development, says it will help customers arrange a loan from Soufun, real-estate brokerage, to cover at least part of the down payment – although salespeople said the exact amount and conditions would depend on the buyer’s creditworthiness.

“It’s too large a pressure for our buyers to pay 50% in down payment up front,” said a saleswoman, Li Xiaona. “We lend them a hand so they can have a sort of a buffer.”

The zero-down payment promotion has attracted plenty of attention. About 100 buyers signed up in the first two days, Ms. Li said, although the rush soon faded.

Only a handful of prospective buyers were at the showroom when China Real Time visited, a striking shift last year, when mobs of eager customers around the country routinely entered lotteries just for the chance to buy similar apartments.

“I’m here for the zero down payment,” said one homebuyer, a 52-year-old businesswoman from nearby Liaoning province. “Otherwise I wouldn’t have come.”

Many analysts believe that China’s largest cities will hold up relatively well in the slowdown sweeping the property market. But developments like Season Joy City, 12 kilometers from downtown Beijing, may still suffer.

“It’s very clear that developers are in a hurry to sell,” said Rosealea Yao, a Beijing-based analyst at research firm Gavekal Dragonomics. “Developers in the suburbs always see the biggest decline in sales and prices [during a downturn].”

In Season Joy City’s showroom, a billboard explains why house prices won’t fall in China. The property market is a big contributor to the economy, it says, so the government won’t allow prices to fall.

“If the property sector is in deep trouble, it’s going to affect a whole lot of industries and that will drag down the entire economy,” said Liu Qinglong, assistant sales manager at the development. “I think in the future the government will set up a long-term mechanism to ensure steady growth of property market.”

But with buyers standing on the sidelines and some developers starting to sound desperate, the government’s ability to support the market may soon be put to the test.